Jane Seymour Joins Me On Stage In San Diego 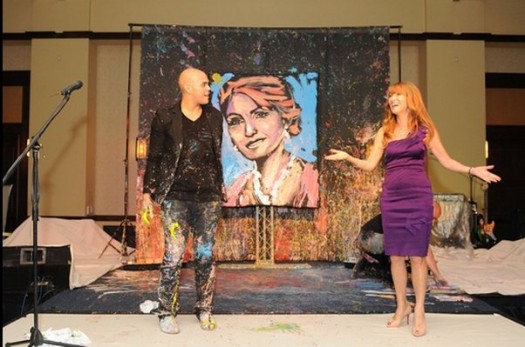 I mentioned last week that while performing for the Forman Foundation in San Diego, I was honored to create a portrait live of their honored guest, Jane Seymour.

Jane Seymour is best known for her acting roles on the silver screen and on TV, but most recently she was a contestant on ABC’s Dancing With The Stars.  She was on hand at the event in San Diego to show support for the Forman Foundation who is on a mission to find a cure for breast cancer.

I created a total of 4 paintings that night, one of them being Mrs. Seymour, and we raised a total of over $35k to go towards finding a cure.  I had no idea that Jane was going to hop on stage with me after the portrait.  The coolest thing was when she came backstage after the show to sign and paint her signature “open heart” symbol on her portrait.  She was such a cool sport, and was as gracious as you would imagine her to be.

MOVING CLOSER TO OUR $1 MILLION GOAL!